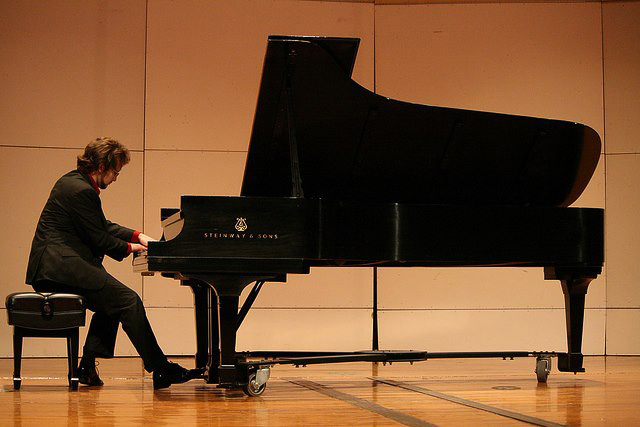 Jarrett Larson (26) is our eldest son. He was initially public schooled, and wanted to do more with his life that was not happening in public school.  After 10th grade, he came to be homeschool. We were all graced and blessed.

He was also gracious enough to be our guinea pig, and so we chose Seton to help with this education venture, as God would have it for him. There was lots of hard work and lots to be fixed, but he made it work. He became a BSA Eagle Scout, Venturing Scout and Leader, and entered the fascinating world of piano performance in classical music.

He also got to spend more time with his family, especially his grandparents who supported his musical talent in many ways. He was also blessed with a wonderful private music teacher, Doris Blake, who inspired him through his homeschool to work long and hard to reach his goals.

He did, he became accepted at the SUNY Potsdam’s Crane School of Music. He has also been teaching the piano to students since he became homeschooled, and continues today privately and at the SUNY campus. He is currently graduating with a Masters and works as the organist for St Mary’s Church in Potsdam, NY, as well as having substituted for a professor at SUNY-Crane.

He finds the time to climb, hike and get trained to do high-ropes courses at Scout camp and work in other related fields. Additionally, he’s climbed all 46 peaks in the Adirondack’s 46er’s list (A non-profit organization whose members have climbed the 46 major peaks of New York’s Adirondack Mountains) with his family. He continues to hike for fun as well as help community events with his musical talents.

Jarrett and his current work can be observed at his website jarrettlarson.com. He has had through all this journey met lots of wonderful and interesting people through his education, hobbies and profession. Everything from rangers, chipmunks who come snatch your bag of gorp, and Canadians in the back woods to Music professors, who saw his talent and mentored him musically. He has also paid his gift back to others and teaches joyfully.

You can also go to Mass in Potsdam at St Mary’s and meet him as your organist.

Homeschooling has truly allowed Jarrett to tailor his education to do the things he felt called to do, and I as his mother have personally heard from him; “Thank you for homeschooling me, I really appreciate what I have”. To me, those words say it all about homeschooling.

Enjoy your Seton choice; it is a blessing, and a blessing to hear your kids acknowledge that.