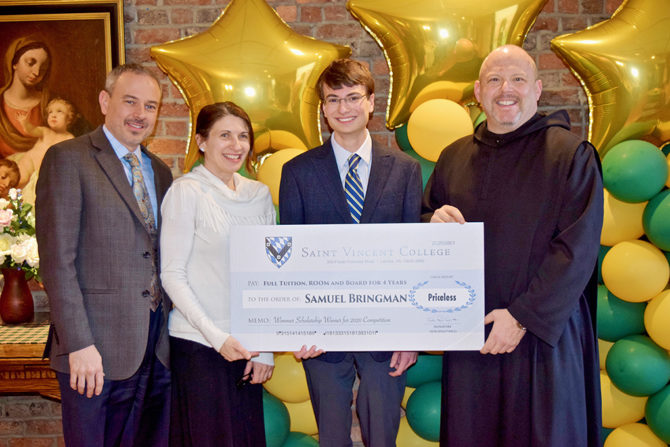 Samuel, the son of Jay and Angela Bringman, won the top award of a four-year, full-tuition, room and board scholarship valued at more than $190,000. He was surprised with the presentation of the scholarship award by Father Paul and dean of admission Heather Kabala during a visit to the Saint Vincent campus.

Enrolled in Seton since Fifth Grade, Samuel and has been accepted into the Herbert W. Boyer School of Natural Sciences, Mathematics, and Computing, with intentions of majoring in physics. A 4.0 student, he scored in the top one percent nationally in the Classical Learning Test (CLT) and has won first place at the Bloomsburg University High School Science Iditarod. Bringman is an Eagle Scout and his hobbies include reading, hiking, camping and playing the piano.

He has six younger siblings and is a member of Sacred Heart Catholic Church in Lewisburg.

The Wimmer Scholarship Program is named in honor of Archabbot Boniface Wimmer, who founded Saint Vincent College in 1846 as the first Benedictine college in the United States. The program is designed to recognize high school students with outstanding academic abilities and to encourage them to pursue a quality undergraduate education at Saint Vincent.

The Scholarship winners are based on their performance on a written examination administered at Saint Vincent in November. Students who participated in this year’s examination were college-bound and met the academic qualifications of a minimum 3.25-grade point average and 1170 SAT/24 ACT. This is the 39th year of the scholarship competition and 155 high school students participated.

Saint Vincent College’s approach to education is rooted in a core curriculum that provides all students with a broad-based education that provides a general body of knowledge in the humanities, social sciences, natural sciences, mathematics, philosophy, and theology. This interdisciplinary view of that knowledge provides the skills to become life-long learners and leaders in their field.

In the top photo (from left to right) Jay, Angela, and Samuel Bringman are presented with the Wimmer Scholarship by Saint Vincent College president Father Paul R. Taylor, O.S.B.

In the bottom photo (from left to right): Angela, Samuel and Jay Bringman with the ceremonial check commemorating Samuel’s awarding of the Wimmer Scholarship.