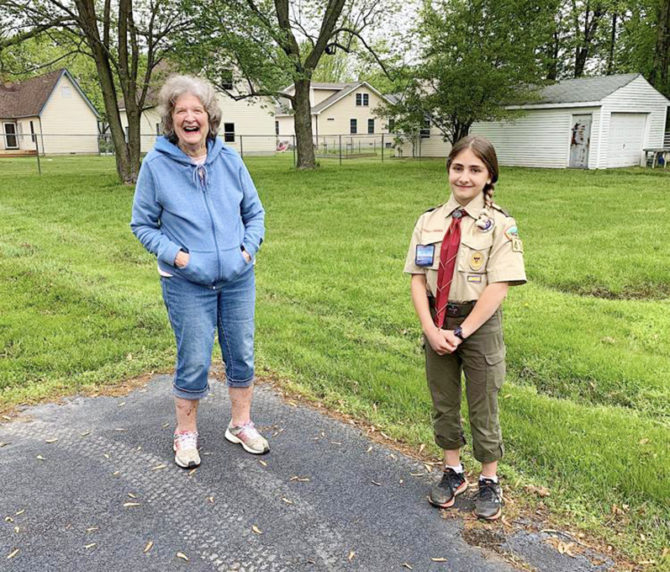 Scout Siena Mae Koch, 12, a member of BSA Troop 496 in Stevensville, was in her backyard with her grandfather last Thursday, May 7, and she was about to feed her pet rabbit when they heard a faint noise — it was the voice of someone calling for help.

Siena and her grandfather ran to the far back corner of their yard where the voice seemed to be coming from. They looked into the heavy, brush-covered woods and spotted an elderly neighbor, Aida Martin, stuck in a three-inch deep, cold, and muddy puddle of rainwater. She was holding on to a chain-link fence for support.

Siena had no idea how long the elderly woman had been seeking help, but she knew that she had to act quickly. Despite the COVID-19 pandemic physical restrictions in place, Siena knew she had no time to go inside her house and seek assistance or to put on gloves or a mask or even get a rope.

Ignoring her own safety, Siena stepped into the middle of the cold and muddy puddle and placed her arms around the woman’s waist and underneath the woman’s arms in order to stabilize her. Then, before attempting to move the woman, Siena assured the woman that she was safe and that she could relax her body.

Siena’s grandfather had gone into the house to change his shoes for some rain boots. By the time he arrived at the scene, he found everything under control. Siena and her grandfather slowly removed the woman from the puddle, and they stood on each side of her and supported her arms until she regained her balance and strength. Finally, when the woman felt strong enough to walk on her own, Siena and her grandfather guided the woman to the main road where she was able to return to her home.

As they were walking to the main road, Martin said she was 84 years old and that she had walked into her backyard to feed a neighbor’s dog. She said she accidentally slipped into the puddle and lost her balance. Martin said she had been stuck in the cold, muddy water for at least half an hour, and she had been praying for her guardian angel to rescue her.

Angels come in many forms. In this case, an angel appeared not in the form a white-winged agent of God, but rather as a 12-year-old female scout named Siena Mae Koch who was ready, willing, and able to obey the Scout’s Code of Honor by, among other things, helping other people at all times — even during a pandemic.

Siena, her father, and five siblings went on to dig a drainage ditch the next day to drain the puddle where Martin was stuck.