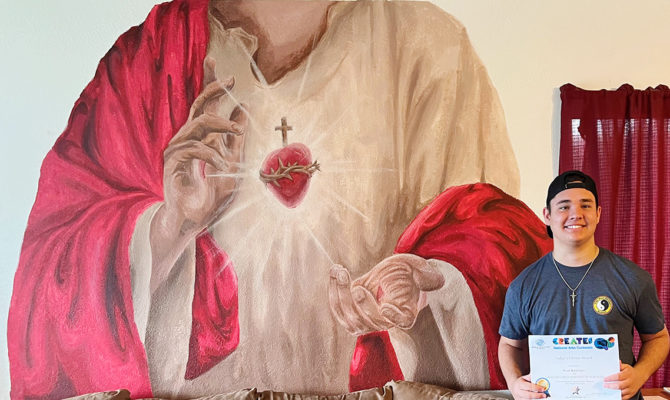 His art was a focal point in “The Ceremony of the Enthronement of the Sacred Heart of Jesus in the Family” held in January of this year at Noah’s home in Kaneohe. His piece also received the “Judges Choice Award” in CREATES National Arts Contest in February 2022.

Noah says that Seton’s Catholic Apologetics course was a highlight for his senior year. Learning to defend his faith has had a profound impact on his art.

Regarding his presentation, Noah shared that in his discernment he was drawn to this passage from Exodus: But, the Lord said (to Moses) “you cannot see my face; for man shall not see me and live.” (Exod 33:20). Reflecting on that, Noah felt that his rendering of the face of Jesus would detract from His (the Lord’s) true presence.

As a side note, Noah is legally blind with no vision in his right eye and no peripheral vision in his left eye. His blindness is the result of a brain tumor on his optic nerve, 2 craniotomies and proton beam radiation.

In 2015, as a malade, Noah went on a pilgrimage (sponsored by the Catholic Order of Malta) to Lourdes, France and immersed in the waters where the Blessed Mother appeared to Bernadette in 1858.

Because Noah was in and out of school due to long term illness, homeschooling has been very helpful in keeping him on track and graduating without much delay.

The photo was taken in Noah’s home in Kaneohe, Hawaii.