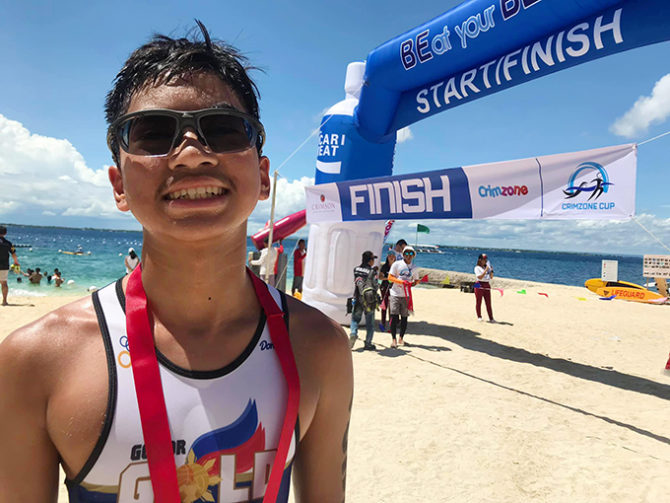 Akio Habana is a 13 year old triathlete from Cebu, Philippines. He was the overall champion in the Crimzone Cup Aquathlon last May. He ran 1.5km, then swam 500m, and ran another 1.5km to the finish line. He beat the other athletes across all age groups from 13 to 50-years-old.

He also made it to third place in the National Age Group Triathlon (a qualifying race to join the Philippine triathlon team) and is currently training for the Iron Kids 2019 scheduled for this coming August.

Homeschooling allowed him to train daily. It teaches him discipline in managing his time well so he can finish his school requirements while providing time to recover in-between trainings and races. Studying with his two younger brothers (aged 9 and 8-years-old) and training together as triathletes make it more fun and interesting for him.

Akio plans to put up his own business someday soon and support his dreams of becoming a professional triathlete in the future. He also plans to coach younger kids and encourage them to become active in sports. He is inspired by the discipline and tenacity of elite triathletes from all over the world.

His favorite subjects are Business and Economics. As early as now, he wants to understand how to start and run his own business.

The photo was taken at the Crimzone Aquathlon Cup in Cebu, Philippines where Akio won the overall champion title.