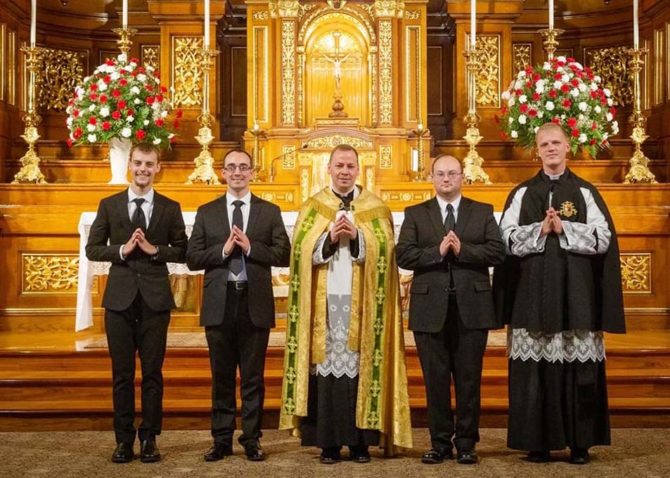 I have been accepted into The Canons Regular of St. John Cantius in Chicago, IL. I have been discerning the priesthood since I was about 13 years old, exploring a variety of different religious communities in the past few years.

On the feast of the Nativity of St. John the Baptist, I officially became a Postulant. God willing I will receive my habit and begin my Novitiate on Aug. 14th. The charism of The Canons Regular is the Restoration of the Sacred.

My Catholic education and upbringing gave me the tools I needed to be open to God’s call for my life. Being able to study my Catholic Faith deeply helped me to discern my vocation.

I have been involved in Archery 4H for many years and 2 years ago, I started a Rosary making business called Catholic Armory: Battle Ready Rosaries.

I was inspired to create “tactical” Rosaries for military persons, but it grew to serve active people who needed Rosaries that wouldn’t break!

To become a holy priest

Religion, Latin, and History are my favorite subjects because I want to know all I can about my faith and the history that has led us to this point in time.

The photo was taken at St. John Cantius Parish in Chicago, IL. I’m on the far left. In the center is Fr. Joshua Caswell, Superior General, and Father Matthew Schuster, Postulant Director is on the far right.

“Three new postulants were officially received into the Canons Regular of St. John Cantius at Solemn Vespers on the Nativity of St. John the Baptist. Ethan, Paul, and David were joined by Fr. Matthew Schuster who officially became their Postulant Director. They hail from Washington State, Michigan, and Illinois, respectively.

Their postulant formation will focus on the following: “to familiarize himself with the rich liturgical history of the Roman Catholic Church, cultivate a desire to participate in the Liturgical Offices of the Church according to the present norms, and to develop in the communal life of the Canons Regular as indicated in the Constitutions.” (Constitutions, Chapter VI, Section B Itinerary of Formation)