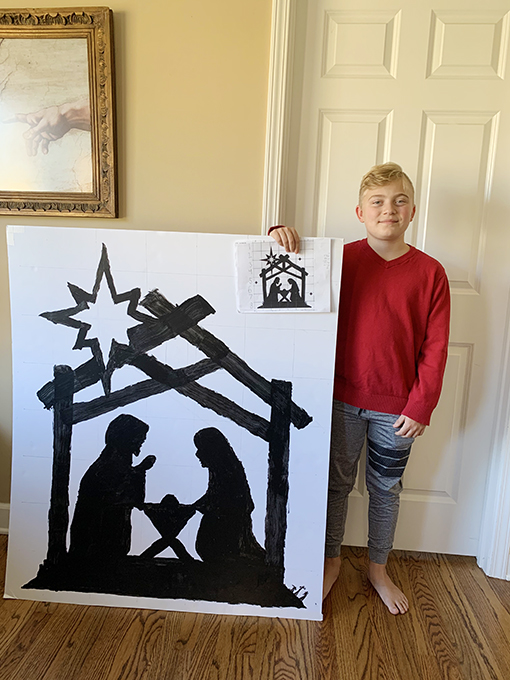 Jonas Lambert, a first-time homeschooler this year, used his Art 6 for Young Catholics grid lesson to enlarge and reproduce a Nativity silhouette for his grandparents’ picture window.

“My grandparents had just downsized to a smaller home and didn’t have any decorations for their new place, so I created this for them. They are very excited to have it for the upcoming Christmas season.

The Art 6 Lesson taught me to enlarge the St. George picture using a grid and then challenged us to do another one. So I decided to do something really big that was also useful for my grandparents’ house since they just moved closer to us.

I chose the Nativity Silhouette scene, and even though I made it five feet tall, it was easier to make than the St. George picture! Once I completed the grid and outlines in pencil, I used black acrylic paint on foam board. I never would have done thought of that or done that if I was not homeschooling.”

When asked about his interests, Jonas said, “I enjoy boxing and video games. And your favorite subjects and why? “Math is easy for me and science is fun.”

The photo was taken at Jonas’ grandmother’s house, where he drew and painted the giant Nativity Silhouette.